"The Darn" Are Coming To The Pacific Northwest

The four piece version of Those Darn Accordions, (2 accordions, bass and drums), head for the great state of Oregon for a 3 day mini-tour.  First up is the Seaside Elks Lodge on Sept 8, then the Old World Deli in Corvalis on Sept 9.  Finally it's McMenamins Oktoberfest at The Old St. Francis School in Bend on Sept 10.
We've played a few shows with "just" two accordions, bass and drums in
the past due to scheduling conflicts and such, but now we're giving
this stripped-down version of the band a name to differentiate these
shows from full-on Those Darn Accordions shows. We think "The Darn"
works nicely, and if you're in the area next month, we hope you'll
come check out the show. We'll be playing tons of TDA songs (and
sneaking in a few surprises).
Check out the TDA tour page for more info.
Posted by Paul at 8:26 AM No comments:

Those Darn Accordions Set to Rock At Cotati Accordion Fest 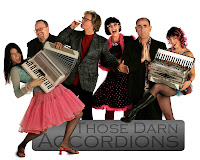 Those Darn Accordions close out America's Premiere Accordion Festival in Cotati this Sunday, Aug 21 at 6:15.  TDA promises to deliver a high energy set of snappy originals and "bellowized" classic rock standards.  There's no better time to be had anywhere this weekend in Northern California.
Posted by Paul at 10:52 AM No comments: