The first Los Angeles Accordion Festival is happening this Friday through Sunday at the Fraternal Order of Eagles Hall, Aerie 2188 in Eagle Rock, according to Pasadena Weekly.

"If you think it's going to be all polkas, think again," the paper says. "The event showcases the diverse styles performed on the instrument, including Cajun, Irish, rockabilly, Tex-Mex, zydeco, alternative and experimental."

Email ThisBlogThis!Share to TwitterShare to FacebookShare to Pinterest
Labels: accordion

Behind Every Dumbass Is A Hero 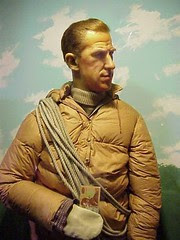 Today is the anniversary of one man inspiring thousands who think they have something to prove. On May 29, 1953, New Zealand mountaineer Edmund Hillary, along with his Nepalese Sherpa Tenzing Norgay, was the first to reach Mount Everest's summit. Since that accomplishment, Sherpas have carried packs and oxygen for nearly 2,500 ascents. Today Nepal's goverment will issue you a climbing permit for a mere $25,000 per person. Unlike Hillary, it's pretty unlikely you'll be remembered, but good luck!

If you haven't already, check out Those Darn Accordions tribute to this curiosity of human nature with There's Another Dumbass on the Mountain.
Posted by Paul at 7:07 PM No comments:

The man who made the accordion cool (or at least funny) has gone digital. Our parody-song guru and all-around pal "Weird Al" Yankovic is
enjoying his Roland FR-7 V-Accordion, which offers a variety of MIDI sounds, according to Wired.com's Listening Post.
Posted by Paul at 12:08 PM No comments:

Email ThisBlogThis!Share to TwitterShare to FacebookShare to Pinterest
Labels: accordion, friends of TDA

We're on our way to Auburn, California, for Karfluki Fest. It's a two-day festival, running May 3 and 4, but we only play Saturday (our set starts at 5:30 p.m.).

Karfluki Fest has a pretty big lineup:
If you are anywhere near the California Gold country, come on out and join the fun.
Posted by Paul at 10:10 AM No comments: